The story of our St Michael’s Hospice Fundraising

It all started down the local pub…

Existing customers may have started to notice that Neil is currently sporting a “unique” hair do. Please be assured this is no mid life crisis but it is instead all for a very good cause.

Back in September down the local with a few friends it was discussed between three friends how much they would like to raise money for St Michael’s Hospice. 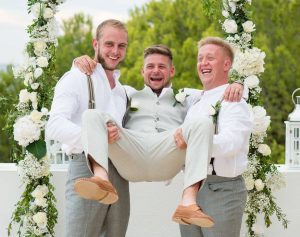 Over the past few years between Neil, Seb and Zak they have lost family and friends, that have passed away in St Michael’s hospice, so they decided that they would shave their hair off and not cut it for a whole year! If anyone knows Neil they would know that he actually goes to the hair dressers once a week, so this was going to be no easy task for him.

When the day came for the head shave there was no better place to cut it than at the pub where the conversation had started. Before a razor had even gone near the boys they had already raised hundreds of pounds and when someone suggested they would donate more if they shaved their eyebrows too the boys didn’t even hesitate…. and off they came. 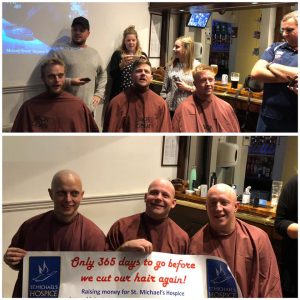 Fundraising went from strength to strength and before they knew it they had raised well over £1000. The Chineham village club organised quiz nights and poker nights in aid of the boys fundraising and this really contributed further to their already amazing amount raised.

Unfortunately though in February tragedy struck. Seb’s mother was diagnosed with incurable pancreatic cancer and sadly she passed away shortly after in St Michael’s Hospice.

This tragedy has made the boys even more determined now. With only a couple of months left they are raising the bar to boost their target as much as possible.

If you could spare any change then it truly would be appreciated. The guys have witnessed first hand what this amazing place does, not just for the patients but for their families too but they need donations to keep this service going.

If you would like to donate to our St Michael’s Hospice Fundraising then please head to the just giving page https://uk.virginmoneygiving.com/zakwoodger